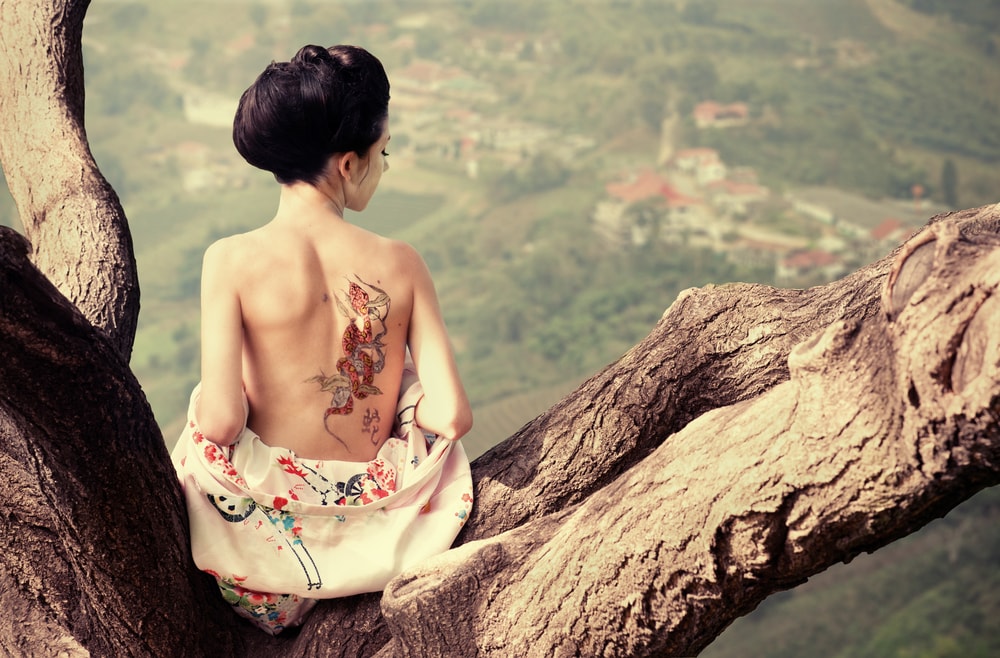 China possesses an old history of tattooing which dates back to the 12th century. Tattooing is locally known as Cshen or Wen Shen, which means “puncture the body”.

Many classic pieces of Chinese literature like Water Margin have mentioned tattooing.

Legend has it that Chinese YuehFei, who served the South Song Dynasty, felt discouraged and dejected as his field marshal betrayed the dynasty and teamed up with enemy forces. This incident was so devastating for him that he resigned and returned home with a heavy mind. It is the time when he was encouraged by his mother who reminded him that his first duty is to protect the nation. In order to reawaken his patriotism, she tattooed four characters on his back with a sewing needle — jinzhongbaoguo, which stands for something like “Serve his country with ultimate loyalty.”

Chinese tattoos are also associated with criminals at some point in Chinese history. There was the time when convicts were tattooed on the face as they were sent to a faraway land. The tattoos helped people that the person is convicted if he appeared publicly.

That was the blast from the past. Coming to today’s scenario, Chinese tattoos have become popular, even in the west. They are characterized by beautiful characters. They not only look aesthetically pleasing but also can be meaningful.

Here is a list of such Chinese tattoos to choose from.

It would be fair to say that the dragon has become the face of Chinese culture. There is no reason why it shouldn’t be a popular tattoo. Although they are intimidating, Chinese people believed them the creature of good fortune and prosperity. We don’t know if this is a myth or fact, but one thing is for sure that dragons make an awesome tattoo design.

And there are many dragon tattoo designs to choose from while each one carries a special meaning.

Here is a list of some popular dragon tattoo designs along with their meaning.

• Asian Dragon or a Jade dragon stands for wisdom, prosperity, and power.

• Gothic Dragon is a dark styled dragon design standing for strength and power.

• Moon Dragon shows the relationship between nature and the subconscious.

• Rising Dragon is believed to help overcome a tough phase.

• Sleeping Dragon is a creature of potential or strength and power that are resting.

• Tiger Dragon stands for conflicting duality, like yin and yang. The tiger stands for femininity while the dragon represents masculinity.

• Tribal Dragon represents a spiritual connection of ones with nature.

Chinese characters are one of the popular tattoo designs and have been in vogue for long. They beautifully represent passion, emotions and lifetime as a tattoo. You can get them in several scripts. One of the popular scripts is Seal which makes calligraphy mysterious and decorative. They look more like pictograms than words. Another popular calligraphy is a cursive script or Grass style writing. It is known for its abstract charm and vivacity.
Many celebrities like Mary J Blige, Sher Melanie Brown, Julia Roberts, and David Beckham have sported Chinese typography tattoos.
Make sure to choose a reliable Chinese tattoo parlor to get it done. This is because a slight twist in the phrase can change the entire meaning.

Chinese Koi Fish design represents growth and persistence as the koi fish is said to swim upstream its way to a special gate, at which point it turns into a powerful dragon. Koi fish designs are also popular among Japanese.

• Red stands for the connotation of love, power, and bravery.

• Black encourages for overcoming an obstacle.

• Blue color represents masculinity and is associated with reproduction.

• Yellow color denotes fortune and wealth as it is the color of the gold.

Chinese Buddha is also a popular tattoo design. It represents love, peace, and purity of life. From a golden Buddha, Buddha with Bodhi Tree to the laughing Buddha, there are a variety of Buddha tattoos to choose from.

Here are three popular Buddha tattoo designs to choose from…

• Amitabh Buddha is recognized by the opened position of his hands. It stands for enlightenment in the lives.

• The Laughing Buddha or Budai shows a smiling man with a bald head and a big belly. He often carries a cloth sack. Did you know that the Laughing Buddha is not a Buddha? However, it makes one of the cool tattoo designs to choose from.

• Shakyamuni is depicted as Buddha with a slender built and recognized by curly hair in gold shades. It represents compassion.

Chinese Phoenix or Fenghuang:Yin and Yang:

Fenghuang is a Chinese counterpart of Greek mythological bird Phoenix. Like its Greek counterpart, the bird is said to reborn from its ashes after death. The Chinese Phoenix stands for prosperity, grace, and virtue. Besides, it also represents the beginning of something new. Make sure to have flames in the backdrop of the tattoo as it can be mistaken by onlookers for some kind of exotic creature.

Yin-Yang symbol is ruling every form of art, be it a logo, graffiti or a tattoo. They are the combined form one swirl paired with another in the opposite position. Yin is a dark swirl that stands for feminism while the yang is known for growth, passion, and masculinity. Simply put, they stand for the confluence of feminine and masculine qualities. Or you can say that Yin Yang is all about how the interaction of opposites can develop peace and harmony. In fact, it is the center of Chinese philosophy.

The Yin Yang Symbol has many variants when it comes to tattooing. And they can be placed anywhere across the body. You can get a matching design with a friend or a lover. For example, yin is placed on your arm while yang in inked on your partner’s arm. It also looks trendy when taken in a watercolor form. Likewise, it looks unique if it is dotted with the moon and the stars on one side of the symbol.
So these are cool Chinese tattoo designs to choose from. Like we have said before, make sure to get them done from the right Chinese tattoo artist. This is because not all are familiar with the Chinese language. Maybe most tattoo artists just copy the design and draw it on the skin without knowing the meaning or significance.

One more thing—Chinese tattoos, like other tattoos, are painful. They cause pain and discomfort. As an added woe, it makes lasts hours if you go for larger tattoos. Make sure to apply a numbing cream to the area to be tattooed to feel no pain.